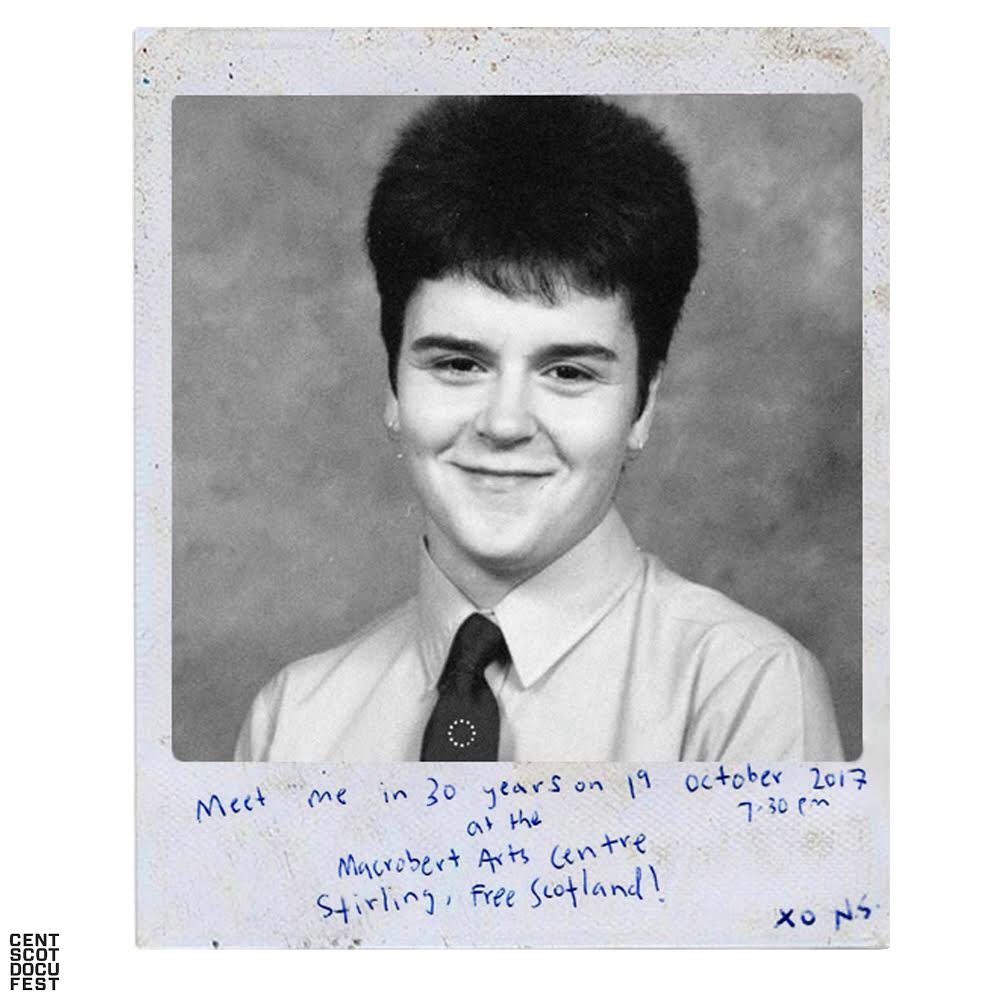 Photo: Brexitannia meme promoting a screening at Central Scotland Documentary Festival
PH: In addition to directing the film, your fingerprints are all over the social media marketing for Brexitannia’s various festival screenings. When did you think of creating meme-style graphics for your film?
TGK: I don't think we understand and celebrate memes enough, I remember being a teenage cynic looking nostalgically to past art and music and thinking nothing new or great happened anymore. Then we invented memes. A whole new hieroglyphic language and it's a democratic and inclusive conversational form and we made it. It's beautiful. Most promotional stuff for films I find so boring. Basically everyone just writes facebook announcements and a still with a venue and a date and we’re meant to pretend this is fine. The film world is pretty stale in a lot of ways. I just wanted to do something that I wish I would see and engage people differently and have some fun. Sylvain L'Espérance is this crazy Quebecois filmmaker who made a 5-hour documentary about austerity in Greece that sometimes plays without intermissions. After he saw Brexitannia and my preceding Q&A he said I was a very serious man with a very big sense of humour. I guess this comes out in the memes which are really fun compared to my film which offers a plethora of emotional responses. Every post on Facebook is just an opportunity to take the piss, I guess. I live in Britain. Without humour this place is just rain and replacement bus services.
A woman at a Q&A in Poland said she felt like the narrative structure of the film was like being locked in a Facebook feed and everyone's thoughts were just like tweets. It could also be seen as this portrait of the hive mind, our huge public narrative that we all participate in now.
I'll only make memes if there's something to announce. When there is, I probably spend an hour or so messing around with an idea. Brexitannia has surprisingly made we way better at photoshop. 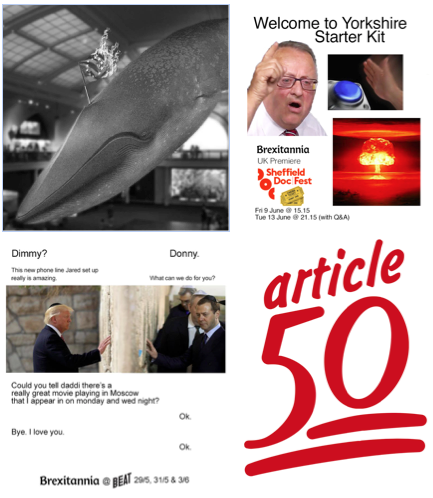 Photo: Brexitannia memes promoting screenings at the National History Museum (USA), Sheffield Doc/Fest, and in Moscow, Russia.
PH: As someone who’s now made two features, what’s your advice for aspiring doc makers?
TGK: My advice for anyone who wants to make something that does not yet exist, is to allow yourself the time to think. To read without rushing. To look at a wall. To stare out a window. To walk with no destination. To do nothing at all. And see which thoughts stick. If you're also lucky enough to have friends with the same artistic sensibility as you, take care of each other, challenge each other, talk about your work and your possibilities without fear of sounding stupid. If you find someone who is critically honest about your work hold them tight, these people are rare and invaluable. And help each other always, with love, with food, with time, with conversation, because in the end you're probably only making films for your friends or the friends you’ll never meet.
Due to the structures of film production I feel like too many filmmakers are waiting for permission from someone or something to make their first feature. Class may also be at play here because it is a very middle-class art form and maybe some people from more privileged backgrounds are just more intuitively able to play the game and they know they must wait. I don’t like this. I think filmmakers should act a bit more like dirt bag musicians and just go out and do it. Think less about “why not?” and more about what will make the film the best with what I have. The gear is cheap enough. It’s just fearlessness and time that’s in scarcity. Fail again. Fail better, etc.
Timothy George Kelly also spoke at Doc/Fest 2017 on the panel session What Does Brexit Look Like?. Click here to watch the whole session on our YouTube.
To view the Brexitannia trailer, click here.
Brexitannia is currently touring select Picturehouse cinemas. Click here to visit the Facebook page for screening locations (& memes!).
Doc/Fest's Director or Film Programming, Luke Moody, will be hosting the Q&A with Timothy at the East Dulwich Picturehouse on Wednesday 1 November. To book a ticket, click here.
The film is also available to stream on iTunes. Click here to purchase (£5.49).
Doc/Comment is a new home for thoughts, interviews, things we love and want to share with our community.